Bitcoin: positive attitude to the cryptocurrency grows on the CME

According to the COT (Commitments of Traders) reports provided by the Commodity Futures Trading Commission (CFTC) – for the week ending last Tuesday:

Hedgers (COMMERCIAL), which usually trade against the main trend, did not change the net position for sale during the week, which remained at the level of 0.14 thousand contracts.

Summary: COT reports on bitcoin reflect the growth of bullish sentiments among large speculators, which after two weeks of growth have reduced the net position to reduce bitcoin from the maximum levels in three weeks. Large funds have reduced BTC sales by 4% and purchases by 2%. At the same time, the net position for the reduction of bitcoin decreased by 14% in a week. Continuation of this trend can contribute to the growth of the cryptocurrency.

Small speculators last week basically reduced purchases, which decreased by 8%. Among the small speculators, bearish sentiment has slightly increased, but they usually do not have a significant impact on the market.

In general, the situation can be characterized as follows: large funds at CME have already reduced their positions for two weeks due to some uncertainty in the market. But last week the number of large funds increased by 5 to 35, with 4 new funds opening purchases, which indicates the growing interest of large speculators to trade in cryptocurrency. 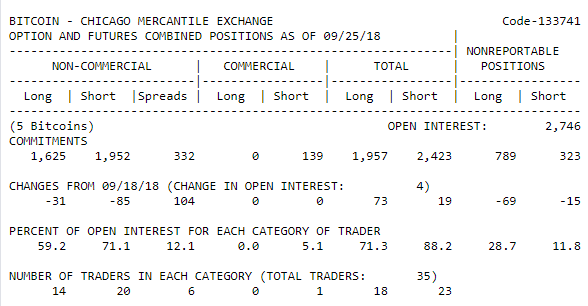