Bitcoin: large funds at CME do not believe in growth

According to the COT (Commitments of Traders) reports provided by the Commodity Futures Trading Commission (CFTC) – for the week ending last Tuesday:

Hedgers (COMMERCIAL), which usually trade against the main trend, did not change the net position for sale during the week, which remained at 0.09 thousand contracts.

Summary: COT reports on bitcoin reflect the growth of bearish sentiment among large speculators, which have been increasing their net position for a decrease in bitcoin for the second week. In the last week, large speculators reduced both purchases of BTC (by 13%) and sales (by 4%), which led to an increase in net position to reduce BTC by 66%. Continuation of this trend can help reduce the cryptocurrency’s price.

In general, the situation can be characterized as follows: large funds used the growth of bitcoin to sell part of their contracts to BTC small speculators. This shows their skepticism about the possibility of further growth of the cryptocurrency. 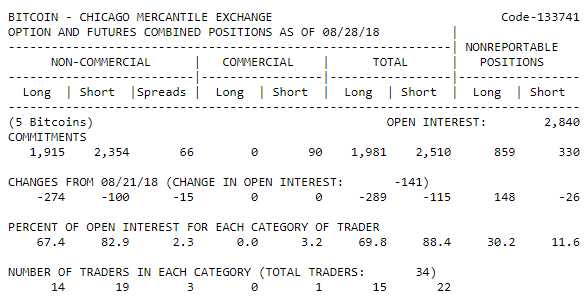 Note: COT reports are fundamental and are used mainly for medium and long-term trading. Large speculators, NON-COMMERCIAL (banks, investment funds) trade usually on a trend. Small speculators, NONREPORTABLE POSITIONS – usually do not have much influence on the market. Hedgers, COMMERCIAL (operators, large companies) usually trade against the trend. Net position is the difference between the number of contracts for buying and selling. Open interest is the sum of all open positions in the market.