There are a number of threats to any asset, be it gold, fiat currency or even stocks. Some of these have real-world issues, such as loss, theft or destruction, and Bitcoin is not separate from that.

There is more than enough literature on the theft of Bitcoin, people leaving themselves exposed to cyber criminals, but there are also instances where people are losing their coins.

Just like Gold can be sunk with a pirate ship, or wads of dollar bills burned in a fire, digital currencies can also be lost and never found again on the Blockchain.

New research by Chainanalysis, a digital forensics firm that studies the Bitcoin Blockchain, showed that 3.79 mln Bitcoins are already lost. This is on the high estimate of the study’s finding, with their low estimate still sitting at an astonishing 2.78 mln. This makes the percentage of lost coins based on what has been mined today to be at between 17 to 23 percent.

Where have they gone? 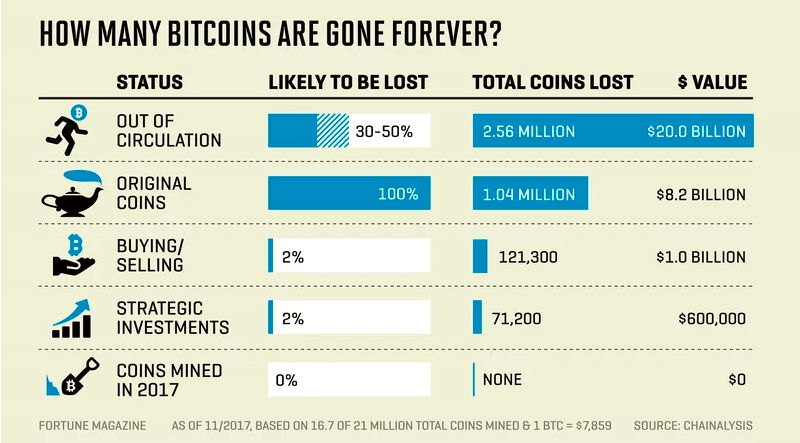 According to a breakdown supplied by Chainanalysis, their research seems to be quite thorough and a little more than just speculation.

In their segmentation of coins that have been lost in different ways, they have broken it down into coins mined in 2017 – which they believe are still all intact and available. It makes sense that there would be more caution in 2017 with the value of fractions of coins worth huge amounts.

When they refer to strategic investments, they are looking at people who have been holding their coins for a very long time, and thus are perhaps not lost, rather just growing in a stagnant position.

Interestingly, and in a big claim by Chainanalysis, they take into consideration the coins that originally belonged to Bitcoin creator, Satoshi Nakamoto. He is estimated to be in the possession of over one mln coins.

However, Chainanalysis have decided to class that collection of coins as lost forever. It is a claim on which their research hinges on as Nakamoto’s coins make up nearly half of their higher estimate of lost coins.

Should, one day, Nakamoto wake like a sleeping giant and bring his coins back into play, this research will be inconsequential and the market will have to front up to a rather large boom in supply.

Because Bitcoin operates on a promise of a limited supply, missing coins, especially verging on 25 percent, will clearly be playing a big part in determining the market. Supply and demand will be quite skewed if those coins mined are not reflecting on the market.

However, do these missing coins really mean that Bitcoin is more scarce than people assume?

“That is a very complex question. On the one hand, direct calculations about market cap do not take lost coins into consideration. Considering how highly speculative this field is, those market cap calculations may make it into economic models of the market that impact spending activity,” said Kim Grauer, Senior Economist at Chainalysis.

“Yet the market has adapted to the actual demand and supply available – just look at exchange behavior. Furthermore, it is well known monetary policy procedure to lower or increase fiat reserves to impact exchange rates. So the answer is yes and no.”